Eating Out in Spain – 100% Satisfaction Guaranteed 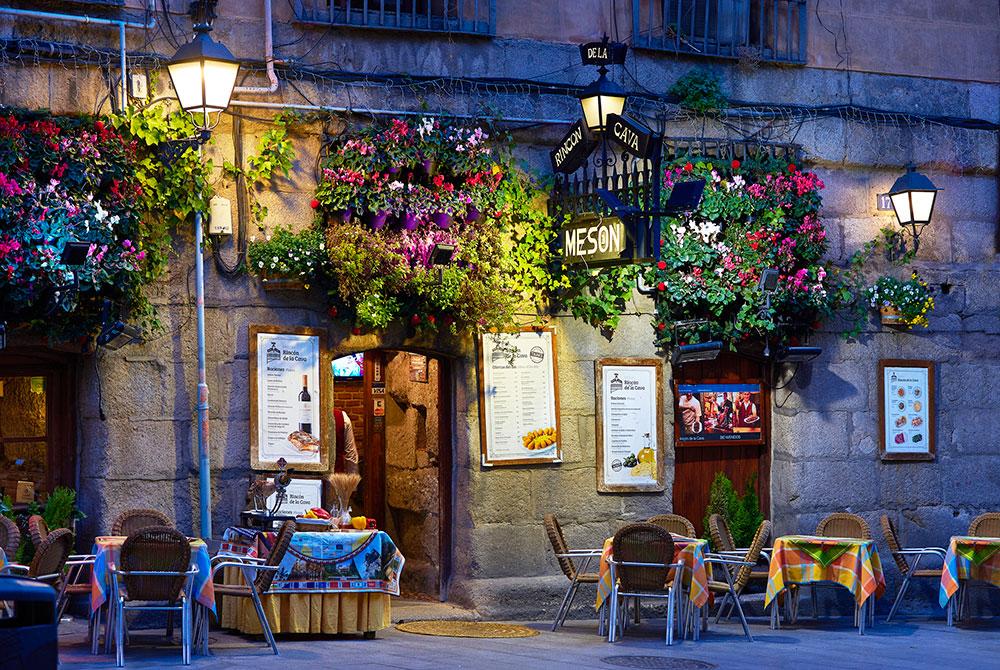 Eating Out in Spain

When eating out in Spain, it’s not always easy to navigate your way through the jungle of bodegas, tascas, tabernas, tapas bars, seafood restaurants, pulperías, mesones, and other restaurants.

And then, of course, you have to get your head around the meal times (we eat lunch and dinner 2 hours later than the rest of Europe!) as well as the wide variety of dishes on offer.

Be brave…dive into the crowd, find the counter with its many hams hanging from the ceiling, and order something to eat (even if you’re not sure exactly what it is!).

Through tasting new foods, you’ll become a connoisseur of flavours.

In Spain, most bars and cafés offer something to eat.

Depending on your appetite and how many specialities you want to try, you can order a tapa (a small portion), ración (a full plate), or media ración (half a plate).

Customers usually stand at the bar, but many establishments have a few tavern-style tables and a more elegant separate dining room.

There is something to suit all tastes and budgets. At lunchtime during the week, many establishments offer a low-priced menu (menú del día) that costs around €10-12. It includes a starter, main course, drink, bread, and sometimes even a dessert. 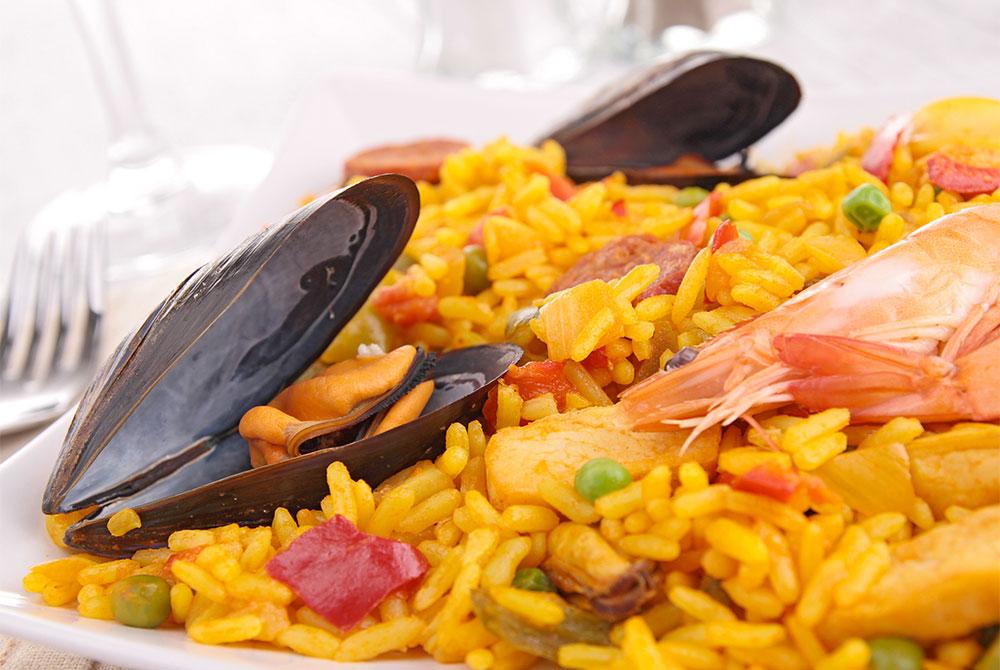 Depending on the region where it’s made, ingredients such as garlic, artichoke, duck, paprika, snails, and rosemary are also added. These variations of paella are “also accepted within the definition of authentic ‘Valencian Paella’”.

Turmeric or food colouring is often used instead of saffron, as saffron is very expensive.

This dish is usually cooked slowly in a large pan (Paella) on a tripod in the open air. 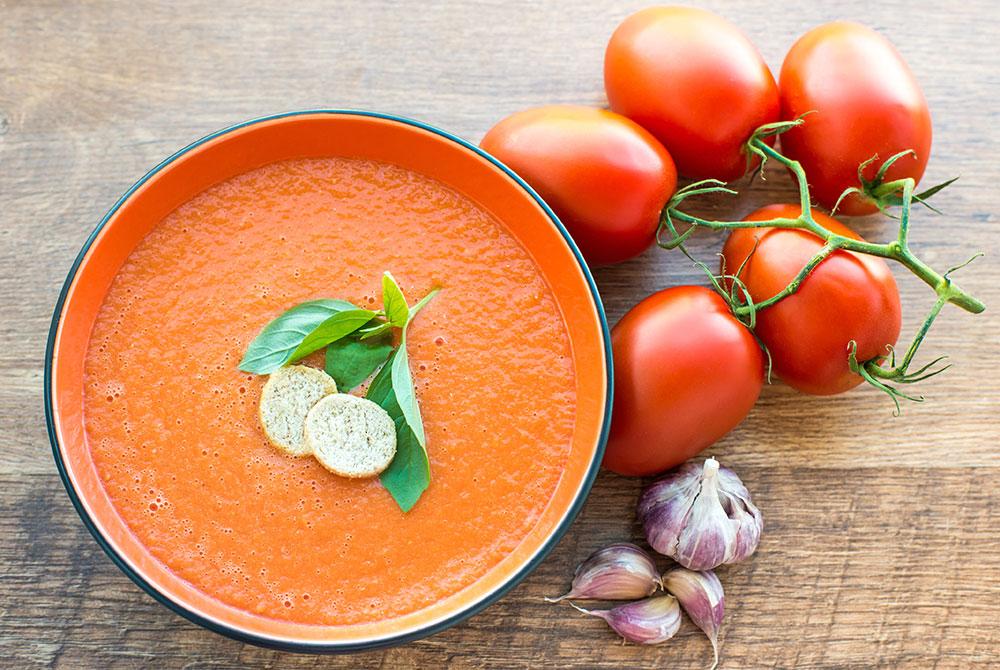 It’s a nutritious and refreshing option during the summer months. 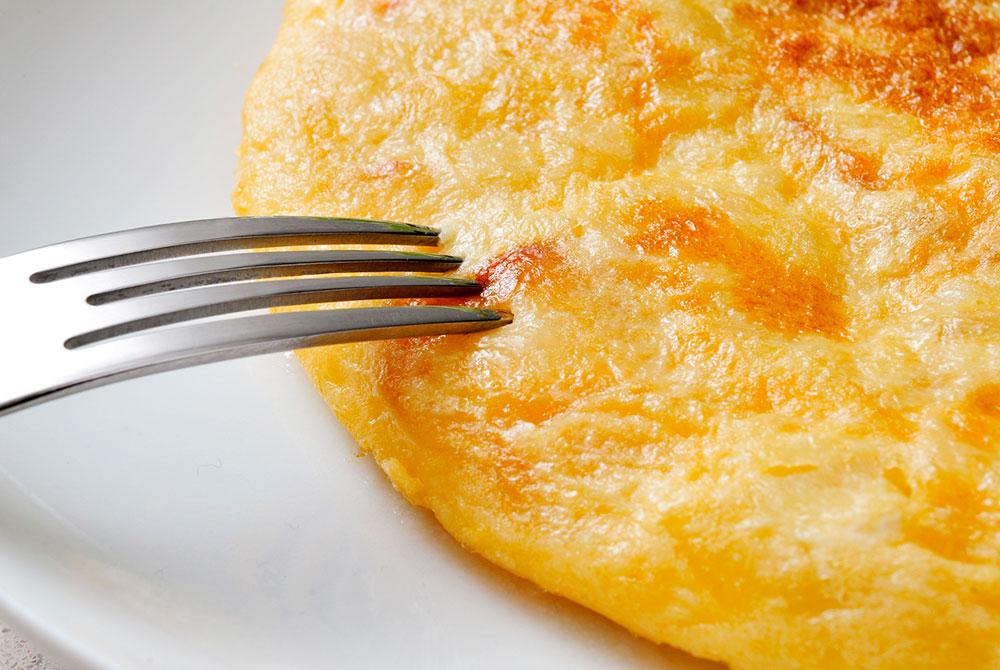 Tortilla is served hot or cold and is typically made of potatoes, onion, peppers, prawns, chorizo, etc. Don’t miss out on trying this delicacy!

Be aware that there’s a “culinary confrontation” between cebollistas and no cebollistas. That’s to say, people who prefer tortilla with onion and those who don’t.

According to many traditionalists, potatoes, eggs, oil and salt are the only ingredients in a tortilla; anything made with different ingredients is just “eggs with things”.

Cocido is a stew made from meat, vegetables, chickpeas, and other ingredients. It’s a popular main dish.

It’s often served as a daily special in restaurants once a week. 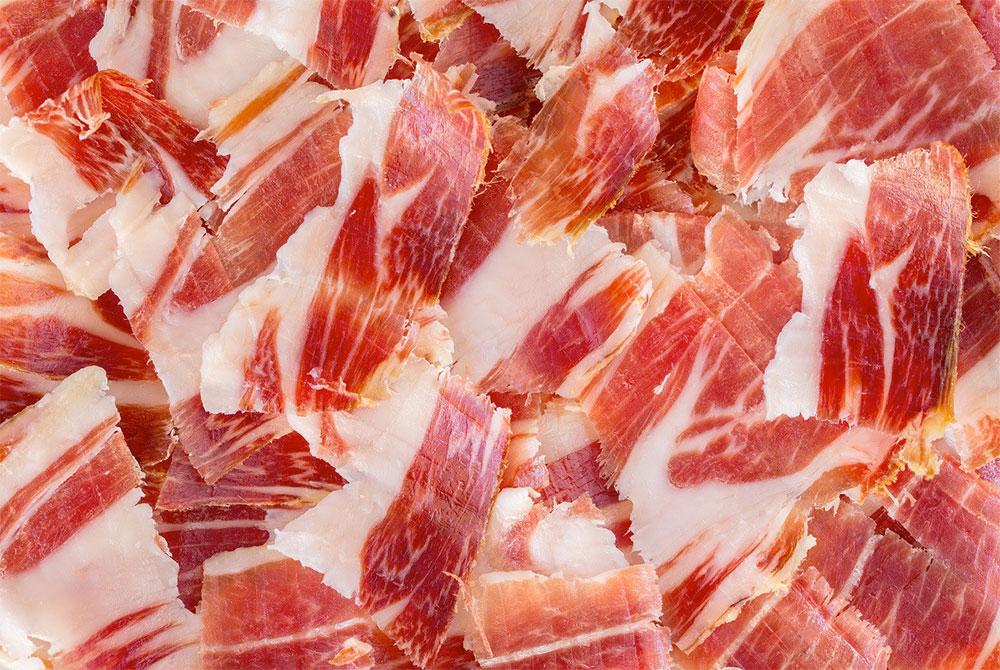 If you don’t know what to choose when you go to eat out in Spain, we recommend choosing jamón serrano (Serrano ham)!

Jamón serrano is a cured ham made from normal or Iberian pork meat.

For many years, people living in the mountains have been covering fresh hams in sea salt and hanging them from the beams of special ham cellars to be cured in the cold mountain air.

A year to eighteen months later, the hams are ready. Requiring no cooking, these hams are cut into paper-thin slices and served with a glass of Spanish wine. Alternatively, the ham is used to make ham croquettes or is added to sautéed vegetables or stews.

There’s a special ham called “Ibérico de bellota”. This high-quality ham has an extraordinary flavour and is very famous both in Spain and around the world.

Hams are classified by where the pigs come from and what they have been fed on.

Jamón serrano is exported to many countries, where it’s a popular food. We highly recommend it! 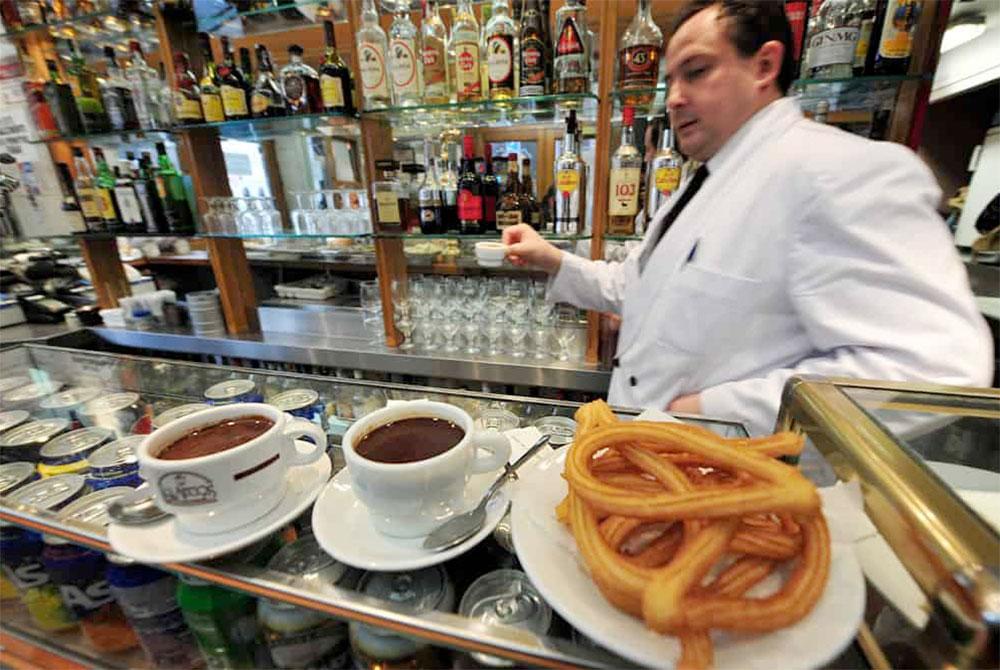 These are fried dough sticks of Arab origin. Porras (large churros) and buñuelos are dipped into traditional thick hot chocolate and are typically eaten for breakfast or as an afternoon snack (merienda).

The most common drink.

To avoid disappointment, you should know that in a bar, una cerveza is a small bottle, while a draught beer is called a caña (ask for “un quinto” for 20cl, “una mediana” for 33cl, or “una jarra” for 50cl). Cerveza mixed with a soft drink such as lemonade is called “una clara”. Some people mix it with lemon soda… but let’s be serious.

The centre of Spain produces some great regional wines. Many of them are recognised internationally and have certified designations of origin (a system that regulates the quality of Spanish foodstuffs).

Among the most famous and excellent wines are those from La Rioja and Castilla y León (Ribera del Duero, Rueda, Tierra de León). Somontano wines produced in Huesca, Aragón and wines from La Mancha are also decent wines.

The home of wine growing in Catalonia is located a few kilometres from Barcelona in the Penedès.

As a result, we have a wide variety of great high-quality wines that enjoy international popularity.

In Extremadura, it’s common to come across pitarra wine, a young artisanal wine that is cheap and average in quality.

It’s drawn a bit like draught beer. It’s light, refreshing and sparkling, and it’s not at all like bottled vermouth.

Make sure to eat tapas while you drink it because it goes to your head very quickly! 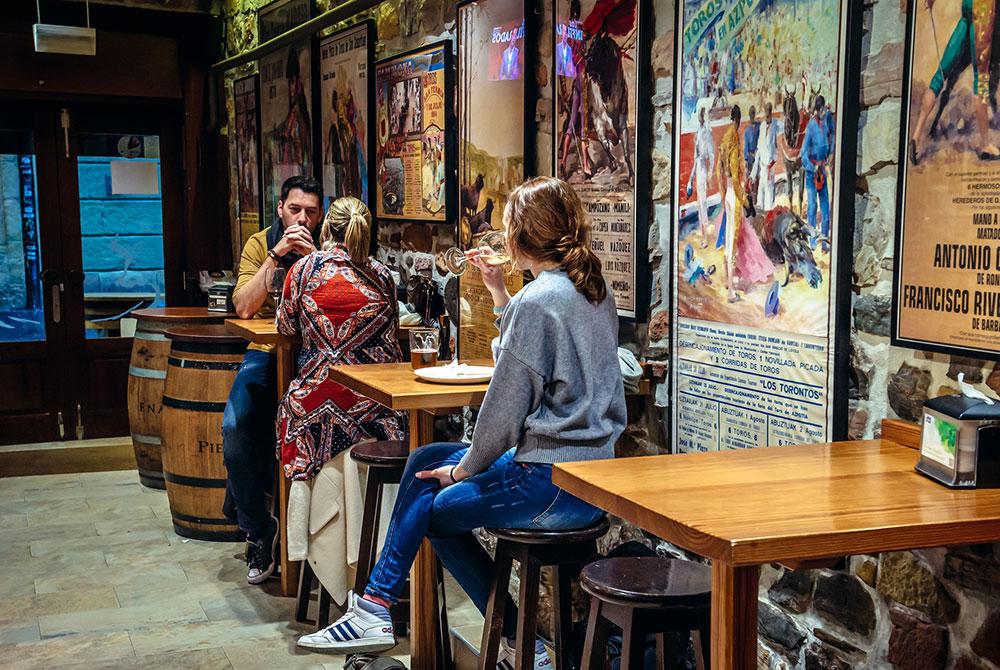 It’s as delicious as it is refreshing. It’s made from tiger nuts, a typical vegetable from Valencia.

The local version of the famous Italian granita, made in Spain with lemon juice, orange juice or coffee and mixed with crushed ice in large slushy machines. It’s sweet, refreshing and cheap.

Coffee is an essential part of a Spanish breakfast.

If you want a black coffee, ask for “un café solo”. Order “un cortado” if you prefer a dash of milk in your coffee.

You can also order “un café helado” (iced coffee) or “un café con hielo” (coffee is served hot with a glass full of ice cubes). Mix it yourself to make a frappé!

Another Spanish staple since the discovery of America.

In Spain, it’s a thick, rich and nutritious drink dense in flavours. It’s made especially for dipping the famous churros into and is very similar to Italian chocolate. 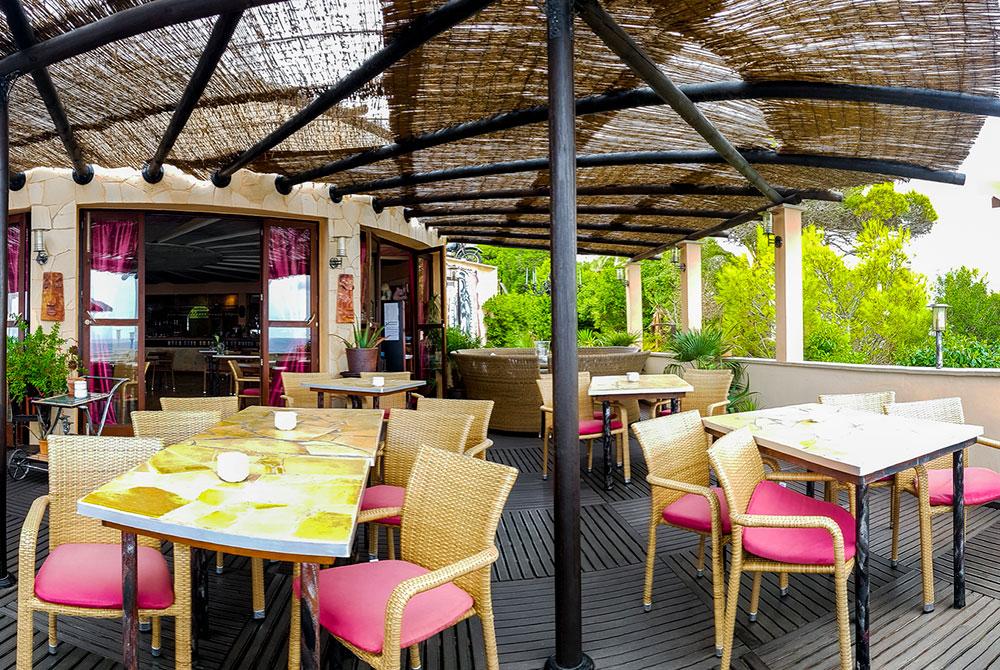 Where to eat out in Spain

When it comes to eating out in Spain, there are plenty of places to choose from.

Spaniards love to eat out and enjoy the warm weather.

Bars where you can eat and drink either standing at the bar or sitting at a table, in the dining room, or even outside.

A bar that specialises in beer. They also offer tapas and raciones, and the atmosphere is usually very lively.

A “bodega” is a type of bar specialising in wines. They also offer tapas, raciones and menús, and they tend to have a fairly traditional atmosphere, making them popular with the locals. 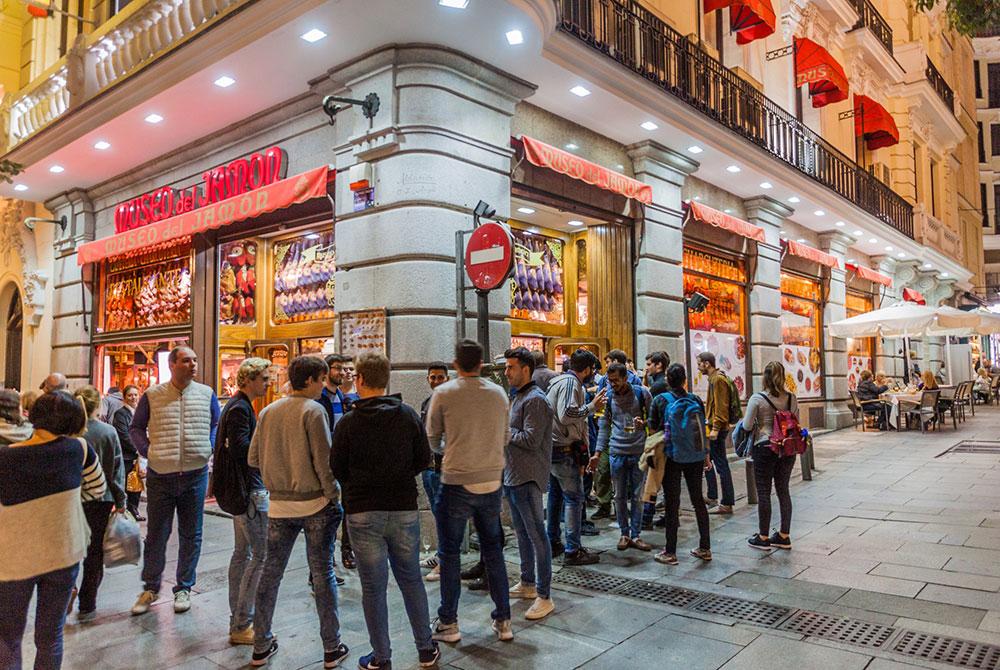 Restaurants are another option when eating out in Spain. Types of restaurants include:

An affordable restaurant that prepares typical cuisine. Popular with locals.

A restaurant specialising in fish and shellfish (seafood). Highly recommended.

This is what we mean by a traditional restaurant. Unless you go to a particularly posh area, you’ll often find a tapas bar or gastrobar next door. Most are good, and some are excellent in terms of food quality.

If you’re a fan of Spanish gastronomy, check out the many Michelin-starred restaurants in Spain.

Spain is, without a doubt, an excellent place to taste exquisite delicacies and enjoy high-quality gastronomic or wine tourism. Spain has a vitalising culture of happiness and enjoyment around cooking and food.

Do you want to learn Spanish and discover more about Spain? Sign up for one of our courses.